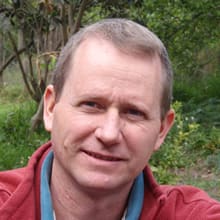 I found ITW while doing research on the thriller genre, and joined two years before my first ThrillerFest. I live in Ecuador, where thrillers are a rare species, so I was surprised to find out that there was actually an organization dedicated to writers in the genre. I’m probably the only thriller-writer in Ecuador with 10 books…

Thrillers Are a Rare Species

I found ITW while doing research on the thriller genre, and joined two years before my first ThrillerFest. I live in Ecuador, where thrillers are a rare species, so I was surprised to find out that there was actually an organization dedicated to writers in the genre. I’m probably the only thriller-writer in Ecuador with 10 books—not all thrillers—under my belt. It’d always been my dream to publish in English—as I do some of my writing in this language—but circumstances had it that I ended up publishing in Germany and Ecuador. So one day back in 2011 I said to myself that it was time to make a serious effort to get myself commercially published in English.

In 2012, as I had enough miles to get to NY and back, I decided to make that first step. With only three chapters and a sense of “it’s now or never,” I singed up for ThrillerFest 2012, asked a friend to put me up in Queens, and went for it.

The concept of pitching to agents in a “speed-dating on steroids” scenario sounded off the rocker, still I prepared myself knowing full well that having only three chapters wouldn’t cut it. Nevertheless, as the business of writing for publication is an ultra-marathon—long time, long distance kind of affair—it wouldn’t hurt to scout it out.

Around ten out of fifteen agents asked for my sample chapters, but as I’d already suspected, nothing would come out of it on the first round. No finished novel, no deal.

On the other hand, being able to meet some many writers and enthusiasts, just becoming part of the milieu, was worth the trip. In fact, after so many years of working away from the publishing highway, it all felt like a breath of fresh air. With new wind in my sails, I decided right away to prepare for ThrillerFest 2013.

A year later I returned feeling slightly annoyed at the fact that, due to personal reasons—I was trying to get my own company on its feet—had left me with less time than I’d anticipated to finish and properly polish my manuscript. In any case, I had re-invented my pitch—adjusting it to the feedback I’d received from agents that had decided not to represent me but were kind enough to hint at what they thought would make it a better story.

As in the previous year, I had a list of around 20 agents that I’d divided in three groups—(AAA, AA, A), (BBB, BB, B) and (C)—having decided to concentrate on New York-based agents only. But it so happens that in the morning before AgentFest (now PitchFest) I crossed paths with Lisa Cerasoli, who was here with Ken Atchity—co-founder of Atchity Entertainment International—an Intellectual Property Management agency based in Hollywood.

I recognized Lisa Cerasoli because one of my Ecuadorian publishers had told they’d met her at a book fair, and considered her to be a good agent. Lisa and I exchanged words, then cards, and we parted with smiles and in the afternoon—during the pitch session—I saw Ken Atchity sitting alone for a moment and decided to approach him after all.

I pitched and Ken said to send him the first 50 pages. Yet, as AEI was on my C list (not working out of New York, and focusing mainly on the film production side of his business), I didn’t follow up on it. Besides, on their website it said that: “Currently AEI takes on only new representation clients with long-range strategic potential.”

Could I be seen as having “long range potential”? I’ve been writing for the past thirty years, yet was doubtful that someone with over 30 films under his belt, and a whole list of represented bestsellers, would be open to an unknown number from, of all places, Ecuador.

Then, on February 6, 2014, and out of the blue, I received an email from Lisa Cerasoli saying they were open for submission and that she would love to see something from me. We exchanged some emails and I finally sent her a full.

On the 9th of March, I received another email from Lisa:

I’m really enjoying your manuscript. It’s very well-written. The opening is intense and detailed. Your writing has a certain hip elegance to it, which is very cool. I’m going to have one of our evaluators read the whole thing.

Then nothing. Silence. Not a word. A month passed. April went and we were in May. Then, suddenly, just when I was giving up on it, I received this on May the 4th:

We have your manuscript in the hands of a second team of evaluators. If you wouldn’t mind sitting tight for just a bit more, that’d be great. We really appreciate your patience.

One of the definite traits novelists should have if they want to remain sane!

Yet another month went by and I began to wonder why they needed a second team of evaluators.

On June 11, Ken himself wrote an email that immediately got my heart pumping double-time:

Time to talk. I’m loving your book and want to be involved in whatever your goal for it is. I’m not quite done with the read, but enough to know that much! Will finish up by Monday—then shall we speak?

But then, my heart almost stopped beating when Ken sent me another email on June 15 with the subject: “Homework” and a note saying:

“Leonardo—If you get a sec to read this before we speak. Otherwise afterwards. Look forward.”

It wasn’t this what gave me the chills. It was the attachment with the reader’s report, stating that the reader recommended a Pass.

Not just a pass, but a definite bloody NO!

Still, Ken wanted to Skype. I wondered why.

When we finally connected—he at sea level in LA, me sitting high up in the Andes—Ken asked me what I thought of the report.

I asked back why, after such a report, he was still interested in speaking to me.

Ken explained that he’d read the first fifty pages and that he’d liked them, and was so surprised at the strong negative response from his reader, that he decided to read the rest. He still had fifty pages to go—so he wasn’t going to make a decision just yet—but he felt that, if I managed to end the novel in a satisfying way, we should speak the following Tuesday to see what his decision would be.

That same Sunday night, though, he sent me another email saying:

“Finished it at the pool. Great tie-up at the end, including Miriam. Still some development should be done with the items noted […] . But all in all, good job!”

Tuesday came and, long story short, we agreed to sign a contract for THE GALAPAGOS AGENDA.

I could hardly believe it!

Ken then sent a series of pages for me to revise—”Just some tweaks”—and I delivered the changes within two weeks, just in time before leaving for ThrillerFest 2014.

ThrillerFest 2014 was a whole different experience, as I now had an agent. Some of the friends I’d made over the past years agreed to read my manuscript and write a blurb. Quite a few did (thank you very much!), writers I would’ve never met and even befriended had I not decided to join ITW.

Let me tell you: It has made a world of difference, going to ThrillerFest. Now a publisher is interested in THE GALAPAGOS AGENDA and I’m working on the next novel with great prospects to see my work being published in English soon, thanks to the support of so many great friends who I wouldn’t have met had I not decided to participate in the full ThrillerFest experience.

On February 22 of 2015, I signed a contract with Suspense Publishing for an eBook edition of THE GALAPAGOS AGENDA, and Story Merchant Books decided to do the print version to come out almost simultaneously, planned for October 2015, using the same cover. If all goes to plan, there may be Advanced Reader’s copies available for ThrillerFest 2015. I am amazed at the number blurbs praising THE GALAPAGOS AGENDA, more than I have fingers on my hand, each one different and unique (crazy, the number of takes readers can have of a single novel), yet all in the vein of Douglas Preston’s review:

“THE GALAPAGOS AGENDA is my kind of thriller – a brilliant and original premise spun out into a globe-spanning cat-and-mouse game that moves with a break-neck pace through a world of international intrigue, extreme wealth, political assassination, and ancient rivalries—and populated with some of the most wickedly drawn villains in recent memory. Leonardo Wild writes with the self-assured style of a veteran. This is a tremendously good novel.”

I sat down with Suspense Publishing during ThrillerFest 2015 to finalize publication details for The Galapagos Agenda. It was a very interesting conversation, where I explained my idea for the series and my plan to create a new sub-genre within the thriller genre. I was thrilled at their excitement and my vision for the future of the series.

In short, The Galapagos Agenda is the first book in a series of Paradigm Shift Thrillers that will touch upon subjects of similar social impact. The victims, in all of them, can be many. Hell, you might even be one of them!

The Galapagos Agenda’s launch date is November 17, 2015, but the pre-sale started at the end of October.

If you are interested, you can acquire it here.