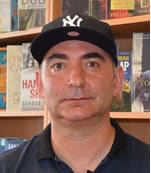 As a journalist and author, I am quite well known in the eastern states of Australia. This is a bit like being a household name in your own house. A couple of years ago, I wrote a thriller, King of the Cross, about the rise and (of course) fall of a Jewish gangster in Sydney. It won the Crime Writers of Australia’s Ned Kelly Award for First Fiction, I optioned the movie…

Success From Down Under

As a journalist and author, I am quite well known in the eastern states of Australia. This is a bit like being a household name in your own house. A couple of years ago, I wrote a thriller, King of the Cross, about the rise and (of course) fall of a Jewish gangster in Sydney. It won the Crime Writers of Australia’s Ned Kelly Award for First Fiction, I optioned the movie rights to a local producer, and assumed I’d quickly become internationally famous. But all that happened was I grew slightly better known in Western Australia.

Agents in the US showed no interest in my work, and didn’t even acknowledge my emails. I was complaining about this to Peter James, whom I met at a writers’ festival in Melbourne, and who had somehow become lost in a city built around one of the most logical gridding systems in the southern hemisphere.

He told me about Thrillerfest, the International Thriller Writers (ITW) conference in New York. I was mildly surprised to learn thriller writers had a conference of their own – although I’d recently shared a ferry ride with a global gathering of proctologists (honestly) so I guess every trade and profession likes to get together once a year and share industry gossip and ass jokes.

Peter described to me an afternoon called “PitchFest”, in which authors without US agents attempt to acquire representation through a process he described as “speed-dating”. (It’s distressing to imagine what the equivalent might be at the proctologists’ conference.)

I was mildly surprised to find “speed-dating” wasn’t a metaphor, but a literal description of the event. There were about sixty agents and several hundred un-agented authors, and the writers had to form queues in front of the agent’s desk. On each desk is a digital timer and a bag of lollies. Suitors have exactly three minutes to impress agents with their proposal, after which an alarm sounds and the next hopeful steps up.

I’d imagined only desperate, unattractive, acned, embittered, left-on-the-shelf agents might be into speed-dating, but some of the biggest agents in the US were represented, and we were advised to impress them by wearing a jacket and smart pants. The dress code had to be instituted to prevent authors from arriving dressed as their character, which had apparently happened in previous years, when a writer of westerns – who shouldn’t have been there anyway – turned up in a cowboy outfit.

The other would-be writers had been to workshops earlier in the day to refine their pitches, and been told to reduce them to a single sentence, which should also be a question. The only one I heard was: “What if Dexter was a professor of philosophy who only killed sex offenders?”

I didn’t have a sentence (“What if the Sopranos was a black comedy about Jewish mobsters in post-war Sydney?”) but I had my book, my award and my un-placeable accent. I spoke with eight agents, all of whom asked to see my writing. We were told not to bring our books, but four of the agents requested copies of King of the Cross. Astonishingly, they all read it within days, and each one arranged a meeting with me.

I met with an obviously brilliant agent from Trident Media in a Madison Avenue building. I had to have a security pass made – with my photograph printed on it – just to access the elevator. (By contrast, my much-loved Australian agent doesn’t even have an office). But in the end I chose Yishai Seidman of Dunow, Carlson & Lerner, because he seemed so fantastically enthusiastic about my work and promised to “never, ever give up” trying to sell my books.

I am now signed to the same agency as Patti Smith, Marilyn Manson and Tommy Lee, and even a few people who are known for writing books.

The next night, I went for a celebratory drink with The Other Mark. Now, I’m not as young as I once was – terrifyingly, I’m not even as young as the current first lady – and an evening of mildly irresponsible drinking scraped the skin off my heart and sent darts into my brain.

So I was not particularly receptive when I woke up in my hotel room – how the hell did I get here? – to a phone call from Mark inviting me downstairs for a conference breakfast. But he appealed to my torn and bleeding conscience, so I gathered what remained of my faculties (i.e. nothing) and lumbered towards the lift.

Breakfast, on the other hand, was noisy and packed, and held in honour of a group of first-time authors who had joined ITW. I wanted to go straight back to bed. The waiter brought around coffee. I asked for tea.

Everyone knows Americans can’t make a proper cuppa, so I wasn’t surprised when the tea the waiter poured was pale yellow, or that he didn’t bring me any milk. I asked for milk, with a condescending smile, and the waiter brought over a little jug, because the customer is always right. But when I tipped it into my tea, it instantly congealed into foul little cheesy balls, because that’s what happens when you add milk to camomile tea. I glanced at it, gagged, and ran out of the room. The bloke sitting opposite me, another hungover journalist, made the same mistake and had the same reaction.

After a couple of hours and two pints of Earl Grey tea I was on the mend, which was just as well, since I was supposed to take part in a panel discussion in the afternoon. I was asked to write a short biography for my introduction. After the moderator read out my modest self-description – “…although quite famous in Australia, he is unknown to anyone but his family in the US…” – he moved right along to Karin Slaughter, introducing her with the words, “And now for someone people have heard of…”

Four months later, Yishai hasn’t yet sold my book, and I’m still not famous in the US, although I am rather well known to the good people who run the ITW and who have been enormously supportive of my efforts take over the world.

I’d recommend PitchFest to any thriller writer looking for a US agent. Unless, of course, they’ve actually written a western.