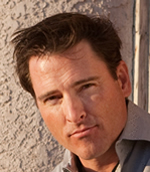 Ironically, Graham Brown almost missed the Thrillerfest 2007 Agent luncheon. Thanks to a flight delay–on the red-eye, no less–he arrived late at JFK and made it to the Hyatt just as the event was about to begin. “I was completely wiped out at that point, and decided to skip the lunch. All I wanted was to check into my room and get some sleep.” Graham confessed.

It Could Happen to You … at PitchFest!

Ironically, Graham Brown almost missed the Thrillerfest 2007 Agent luncheon. Thanks to a flight delay–on the red-eye, no less–he arrived late at JFK and made it to the Hyatt just as the event was about to begin. “I was completely wiped out at that point, and decided to skip the lunch. All I wanted was to check into my room and get some sleep.” Graham confessed. “But another attendee got in the elevator with me, and by the time the doors opened on the ballroom level he’d convinced me to go. So I sat at the very last table and met Barbara, who was not only listening to pitches but helping authors make them better. My first thought was, ‘This person had WAY too much coffee today.’ I proceeded to come up with the worst pitch of all time, which she politely listened to.”

By the end of lunch, Barbara Poelle of the Irene Goodman agency had invited Graham to submit his manuscript. “He was able to mark it with the coveted words ‘Requested Submission,’ insuring that his query would avoid the quagmire that can befall unsolicited manuscripts.” Barbara said. “I read it within days of Thrillerfest, and didn’t even make it to the bottom of page one before picking up the phone to request the full.”

Graham wasn’t the only one lucky enough to land an agent thanks to the luncheon. Jamie Freveletti, who recently signed a two book deal with Harper Collins, also had a seat at Barbara’s table that day. Despite the fact that Barbara had initially passed on her manuscript, based on her comments Jamie felt that an in-person meeting might help. “From the moment she started talking, I was struck by her enthusiasm and spot-on analysis,” Jamie said. “When I got back home, I decided she was right. I retooled the story, then sent the rewrite to Barbara. She loved it, and took me on.”

All in all, both writers felt that Thrillerfest provided the opportunity to meet with agents they otherwise would have had no face time with. Jamie said, “It was a pleasure to be able to ask them what they were selling, what direction they thought the industry was headed in, and what their toughest challenge was.” Graham credits Thrillerfest with not only providing a unique chance to meet agents, but also writers. “Zoe Sharp was kind enough to read a section of my manuscript, giving me some character feedback that was profoundly helpful. It was fun talking motorcycles with her, too!”

When asked if meeting Jamie and Graham in person impacted her decision to represent them, Barbara said, “Absolutely, unequivocally yes.” And she had some recommendations for Agentfest attendees: “Ideally you give me one line that captures the essence of your work, such as, ‘A genetically engineered crocodile terrorizes a small Gulf Coast town.’ If I like the idea, I’ll ask to hear more, so have a five or six line summary prepared for follow-up questions. Something like: ‘A young paleontologist returns to her hometown for the funeral of her father, the Sheriff, who supposedly died in a boating accident. Upon her arrival, she realizes that something doesn’t ring true–not only about her father’s death, but the behaviors of her family, friends, and former neighbors. With the help of the Sheriff’s deputy, she uncovers the truth; the town has been shielding a billionaire’s independent research company, and there are scientific perversions running amok in the waters of this sleepy bayou town.’ Wait, I totally want to read that. Somebody get crackin’ and pitch me at Thrillerfest!”

–Jamie Freveletti’s debut RUNNING FROM THE DEVIL was part of a two-book deal with Harper Collins. Jamie’s debut won the coveted “Best First Novel” award from ITW, but her success didn’t stop there. She’s since published two more novels, RUNNING DARK and THE NINTH DAY, and was asked by the Estate Of Robert Ludlum to write the next in their Covert One series, which is currently scheduled for Fall, 2012. Her fourth novel featuring Emma Caldridge will launch in Fall 2012 as well.

After meeting Barbara at ThrillerFest 2007 and signing with her agency(Irene Goodman Literary Agency) I went back to work on the manuscript for BLACK RAIN. After several months of improving it – including a last minute suggestion of Barbara’s that I didn’t want to do but loved once I’d finished writing it, we went out to several publishing houses. We got two offers and Random House (Bantam) signed us in a pre-empt 2 book deal.

Then the economy hit a rough patch and the launch date for BLACK RAIN got pushed back. It came out in January of 2010 and was followed up by BLACK SUN in August of 2010. At which time we signed a deal for the third book in the Hawker Laidlaw series titled THE EDEN PROPHECY – which comes out in January of 2012 and seems to be generating a good amount of buzz.

In the meantime – completely out of the blue – I got an email from my editor asking if it was okay to give out my phone number and e-mail address to Clive Cussler and his agent, Peter Lampack. Of course the answer was yes, but no information was given to me as to why. As it turned out, Clive had picked up BLACK RAIN in the airport and read it while on a trip to Africa – which is so cool and kind of surreal since I have been picking his books up in the airport and reading them on vacations for years. Apparently he liked it quite a bit and unknown to me was on a search for a new co-author for the NUMA FILES series. He and Peter asked if I would be interested – which is a bit like asking someone if they’d like to drive your Ferrari – of course the answer is yes! – just don’t crash it!

Working with Clive has been a blast – a bit like learning how to hit a baseball from Babe Ruth or Hank Aaron. The first book of this collaboration – DEVIL’S GATE – hits the bookstores on November 14. I think it came out great. I think fans of the NUMA series, both the Dirk Pitt novels and the Kurt Austin novels are going to love it. And we’re already at work on a follow up for summer of 2012. I’d tell you about it but it’s top secret.